Eleven years ago, Sheila first arrived at the Lakes Area Nourish food bank as a client. “I had a house, I had a business. I got sick and I lost everything.”

She experienced homelessness for about five months, until she got into an apartment. The food bank helped her get back on her feet.

“Even people who have jobs are just one step from being homeless. You never know what life is going to bring you.” She says. “Things are not for sure.”

Since that first visit to the food bank eleven years ago, Sheila has been coming back to volunteer. She now volunteers twice a week for a few hours each visit.  She does a little bit of everything at the Lakewood based food bank, but she mostly helps with their small clothing bank there. She sorts donations and gets them organized for the clients.

“I can’t do too much physically, but volunteering made me feel better about myself.” She says. “It’s for my peace of mind that I am here.”

She volunteers to give back. “I don’t feel right just taking and it feels good to give back. It just gives me an opportunity to help others.”

Linda and her family have been clients at the Northwest Tacoma Nourish Food Bank for about six months.

“It’s absolutely wonderful,” Linda says. “The people are awesome and so nice.”

She explains that she moved in with her youngest daughter a few months ago in order to save money on expenses and so she can help out more with her grandchildren. “There are eight of us here at the house. It’s been a good thing to move in together.”

Both she and her daughter work, but it is not enough to pay her household expenses. “We make too much to get food stamps, but don’t make enough to pay our bills and buy food.” She explains that, before she found the food bank that, “there were times when the kids did not have food in the cabinets. The grandkids are excited when I go because they know they can get something they like.”

The number of families like Linda’s are growing. According to a 2016 Pew Research study, there are 29 million people in the U.S. where three generations – a grandparent, an adult child, and a grandchild – all live in the same home.

Linda’s family is an example of an ALICE household. ALICE stands for “Asset-Limited, Income Constrained Employed.” It refers to households that have working family members who make enough that they are above the poverty line, disqualifying them from many types of state assistance. But, their incomes are still so low that they don’t make enough to pay all of their household expenses like rent, transportation, prescriptions, medical expenses, childcare, and food. According to the local United Way, 24% of households in Pierce County are ALICE households because of low wages and a high cost of living.

Linda appreciates that the food bank is open at a convenient time for her – she visits on Saturdays – and says the amount of food she receives is large. “We don’t go every weekend because we get enough that it gets us through a few weeks.”

Linda says she really relies on the food bank staff and volunteers. “It’s had a huge impact. I don’t know what I’d do without them.” It’s been huge relief for her family. “When the kids can eat, then everything is better.”

Darleen and Brittnee, mother and daughter, agree on two things, that life is sometimes unkind and that Nourish provides them with the resources to get back on their feet.

Darleen and Brittnee are clients at the Southeast Tacoma Nourish Food Bank. Darleen is currently recovering from an accident that left her unable to work. Her daughter, Brittnee, is also a mother raising two children while she is finishing classes in culinary arts at a local technical college.

Darleen says “It’s hard financially and I often get low on food.” Darleen says that no food is wasted in her neighborhood, providing any extra meals or supplies to neighbors who need it just as much as she does. “I just feel you shouldn’t have more than you need,” she says.

Brittnee talks about her children, “The kids are growing and very active so they eat a lot.” She says the food bank provides her some solace when things appear bleak.

Darleen explains that they only come to the food bank when need it. “I try not to use it but sometimes I just have to.” For this family, Nourish helps keep hunger at bay so they can address other needs in their life.

Thank you to Chris Fruitrich, retired journalist and current Nourish volunteer, for this interview.

Lisa has been visiting the Southeast Tacoma Nourish Food Bank for the last five or six months.

She and her husband care for two of their aging parents, who have moved in with them. “There are four of us here now. Things are tight but we are trying to get through it.” One of their parents has a long-term medical issue that requires frequent doctor visits, the other is suffering from dementia, Lisa explained.

Lisa cleans houses and she works whenever she can, but, she has lost a few clients recently and she has been busy taking her family members to medical appointments. Her husband works full-time building and repairing cell phone towers. She said they are trying to support everyone in the house on just one income. “It’s hard to make ends meet without the food bank.”

Experiences like Lisa’s, where a family member is caring for aging parents, is becoming more common. According to the Pew Research Center, one in seven adults provide unpaid care for other adults in their lives.

Lisa first found the food bank when a friend brought her to visit when she needed help. Now, she gives other people a ride when they need it, so they can get help too. “God put us on this earth to care for and help one another.” She says the food bank is truly helping people right now. “You are a true blessing to people.”

David started volunteering at the Lakes Area Nourish Food Bank when he was in high school. He was told that he needed community service hours to graduate and the school presented him a list of places to choose from. A family member had relied on a food bank in the past, so he picked the Lakewood based food bank from the list. 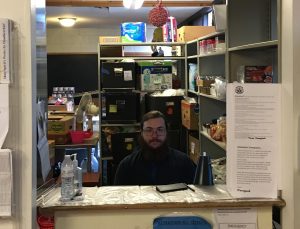 David did not stop when he completed his community service hours. Three years later, David is still volunteering. He keeps a regular schedule and volunteers three days each week.

David helps out in many ways. He works the check-in desk, greeting clients when they first arrive and keeps the shelves stocked with food. When the food bank is not open, he works with the grocery recovery team, helping to collect food from grocery stores that donate products to the food bank.

Through his interactions with the clients and other volunteers, David wants to improve himself.  “There are so many things to learn and know. I ask myself how do I do this and how can I do it better?”

He sees the value in what he does for the community. “The food bank gives people who are in a slump an opportunity. It is not only about food, but it also provides happiness. You come here and you feel happy. The people here want to give you what you need.” David says.

Join David and visit our Volunteer page to sign up.