The day I met Randy, it was his 69th birthday and just like every Thursday, he was at the Edgewood Nourish Food Bank, volunteering. “The older I get the more I want to be a part of the community,” he explained.

Ten years ago, on the day he retired, his mother sat him down and asked him what he was going to do with his time now. She reminded him that his father was involved in several civic organizations. She suggested he visit the food bank to see if they needed help.

It was an ideal match. A former mechanic at Boeing, Randy said “That’s what I do. I fix stuff. That next Thursday, I came here to the Edgewood food bank and I’ve been coming back every week ever since.” 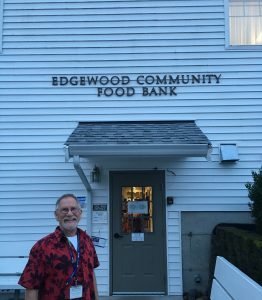 Now, Randy brings his mechanic’s precision to his volunteering. He explained that they serve 60 people every hour at Edgewood. He’s proud of that and makes sure that people know how the process works before they begin.

Randy greets clients, invites them inside, and assigns them a number. When their number is called, they walk through the food bank aisles to collect their food. “People are so thankful. It’s a family atmosphere, and all the people thank you as they go through.”

Kate, the Edgewood Nourish Food Bank manager said that Randy brings compassion, dignity and respect to his volunteering. “Randy has a heart of gold. When he sees a need, he is right there with a solution. He is well loved by clients, volunteers and staff.” Kate shared a specific story about how Randy saw a need and helped to address it it. “He realized an automatic number system would be helpful for our clients, so he went out and bought one.” Kate said, “I am forever grateful Randy found his way to the Edgewood Nourish Food Bank and into our hearts.”

One of the other volunteers had brought a cake for Randy’s birthday. Before I left, Randy made sure I had a piece to take with me.

To learn more about the Edgewood Nourish Food Bank, read our “Get to Know a Food Bank” feature on Edgewood.